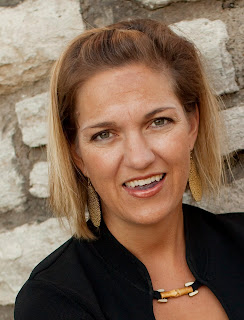 What To Expect When You’re Expecting Larvae: A Guide for Insect Parents (And Curious Kids) (Lerner) is Kansas City author Bridget Heos’ first picture book, released this month. Bridget has joined us today to tell us about her book and her journey.

Welcome, Bridget, and congratulations on your new book! Tell us about it.

Sounds great! I saw much earlier versions of your manuscript, so I can’t wait to get my hands on the finished product.

Take us back a bit. When and how did you learn Lerner wanted your book?

Well, I’d sent it to 13 editors (a good, unlucky number!) Rejected! Then I sent it to my now agent Kelly Sonnack of Andrea Brown Literary Agency. She took me on as a client and soon after let me know that Carol Hinz at Lerner was interested. It ended up selling in an auction, with Lerner offering a three-book deal. The next two books are What to Expect When You’re Expecting Pocket Babies and What to Expect When You’re Expecting Crocodilians. Carol--and Lerner—are awesome. They’re in Minneapolis. Being from the Midwest, I love that Minneapolis is a children’s book mecca. I hope to visit someday soon and soak it all in.

What have you learned along the way about publishing?

Well, it’s good to have an agent. Without Kelly, I’m confident I wouldn’t have sold any books. Also, she takes care of contracts and negotiations. And she’s very encouraging. This is a nice business. (To me it feels like I arrived at work to find that all of my colleagues are my sweet kindergarten teacher, Arlene Davis.) But it’s also a tough business, so it’s nice to have somebody on your side.

Secondly, you have to write a lot of books to make a living. I’m writing 12 this year, including work-for-hires, but it took me several years and a lot of pavement pounding, plus Kelly’s help to line up that many. (Work-for-hires are books in which the publisher develops the idea and asks you to write it for a flat fee—no royalties. They don’t pay as much as other books, but they pay faster.)
Currently, I work about 60 hours a week. I’m not complaining! Work is a blessing. I’m starting to write fictional picture books and to do some travel for nonfiction work. I should have a few exciting announcements about book deals later this year.

How have you been promoting your book?

I’ve done a library visit at The Plaza Library, part of The Kansas City Public Library system. I also have a library visit coming up through The Johnson County Public Library Dia! Children’s Book Day, on April 30 at the Oak Park Library. To promote these events, I gave the libraries silkworms as mascots. They’re basically the Official Mascots of Picture Books Being Awesome. I have a Facebook Page @Author Bridget Heos, where I share news about picture books, nonfiction children’s books, my books, and thoughts about professional wrestling (which is an interest.) I also got the chance to be in "The Kansas City Star" FYI section and on Fox 4 Morning News, through Save Everything! (and the Picture Book.)

That said, the publicity staff at Lerner has done much of the work. They sent galleys or copies to several bloggers and librarian and teacher journals. They’ve also met personally with some of these people—flying to New York in some cases. Through that effort, I’ve been featured in A Fuse #8 Production, Kirkus Reviews, and Instructor magazine (published by Scholastic.) They are also very encouraging of my publicity efforts (or publicity stunts, as my dad calls them.)

Tell us about your career. How long you’ve been writing, what caused you to want to write for children, and what’s coming up for you.

I always wanted to be a writer. Now, looking back, it’s obvious I would fall in love with writing children’s books. I was obsessed with Beatrix Potter. I loved musicals about orphans, such as Oliver! and Annie, and that theme is popular in children’s literature. In 5th grade, my friend and I put on a neighborhood play of The Whipping Boy by Sid Fleischman, featuring the music of—get this, Weird Al Yankovic—who is now also a children’s book writer!

But I didn’t know much about children’s books. Now, I see how my sons are with sports—they know the stats, the players, the intangibles. I didn’t have that kind of behind-the-scenes knowledge of children’s books, even though I loved them as much as my sons love sports today.

When my oldest son was little, he became obsessed with nonfiction. After reading about 100 nonfiction books to him (mostly about turtles but some about dinosaurs,) I fell in love with them. I felt so knowledgeable about turtles! And many of them were beautifully written, such as The Dinosaurs of Waterhouse Hawkins, by Barbara Kerley, ill. by Brian Selznick. I thought, “I wonder who writes all these nonfiction books?” I think I googled that very question. I had been writing for newspapers and magazines for several years, so nonfiction seemed like a natural fit. Eventually, I found a local writer’s group. I went to some events and then wrote What to Expect When You’re Expecting Larvae. My friend Ann Ingalls, who also writes nonfiction books for children, helped me a lot when I was getting started.

You’re also involved in a campaign to save the picture book called, appropriately enough, Save Everything! (and the picture book). Fill us in. What’s this about and how can people participate?

Save Everything! (and the Picture Book) is a program in which children read picture books, write reviews, and win picture books. The purpose is to show people the wide variety of picture books available to children of all ages. For instance, a second grader could spend an entire summer reading picture books solely about baseball. (My middle son did just that!) Picture books are great for literacy, imagination, and entertainment.

There is a new theme each month. (In June, it’s baseball.) This month it’s Save the Bookworms! (and the Picture Books They Eat.) You can visit http://savethepicturebook.blogspot.com to download the March flyer. There are book suggestions (including mine, this month!) but you can read any picture book about insects or books. Kids can win books, and teachers can win a basket of books for their classrooms.

What advice would you give to those entering the world of children’s writing? What’s the best advice you’ve been given?

I read somewhere that you need to read 100 books in your genre and write for 10 years before…I can’t remember what exactly is supposed to happen at that point. But those numbers are absolutely accurate. After reading the 100 picture books on Betsy Bird’s Fuse #8 Top 100 Picture Books Poll, fictional picture books started to click for me. Prior to writing nonfiction, I’d probably read more than 100 nonfiction picture books. Also, I’ve now been a writer for nearly 10 years. Like I said, I can’t remember what’s supposed to happen at this point. But from a craftsmanship perspective, I feel like I sort of know what I’m doing—though I still have a lot to learn.
Posted by Jody Jensen Shaffer at 2:33:00 PM 6 comments: